In his time, Thomas Osborne Roberts was one of Wales’s most cherished and admired musicians. He is perhaps best-remembered today (if he is known at all) as a composer of songs such as ‘Y Nefoedd’ and ‘Y Mab Anfradlon’, but he was also very active as an accompanist, conductor, teacher and adjudicator. His fluency of communication in both English and Welsh made him a popular speaker in many Eisteddfodau, which during the early years of the 20th Century were held both sides of the national border; but his versatility as a musician – composer, pianist, and teacher –  gave him an authority beyond this sphere. His second wife, Maggie Jones (better known by her stage name of Leila Megàne), was an operatic contralto whom he accompanied on singing tours to La Scala, the Metropolitan Opera House, Covent Garden, and many other prestigious venues. He was well-liked and respected by such eminent peers as Vaughan Williams, Granville Bantock, David Vaughan Thomas and W S Gwynn Williams, and despite not having a career quite as artistically defined as theirs were, his legacy still includes several popular/classical songs and part-songs that were very successful in their own rights.

Born in Weston-rhyn, near Chirk, Denbighshire, his family moved to Ysbyty Ifan, Betws-y-Coed, when he was 11 years old. From an early age he had come to find joy in music, accompanying his father, a proficient musician himself, who sang while a young Roberts played the harmonium.

While working as a land surveyor, at the age of 23 he moved to Llandudno, and while here, he decided to leave this profession to devote more of his time to music. It was in Llandudno that he wrote one of his greatest hits – a song called ‘Y Mab Anfradlon’ (The Prodigal Son). He also began to write for the local Pavilion Orchestra who performed several of his early orchestral works including his variations on the hymn tune ‘Bangor’, which would have been a valuable experience of orchestration for him as he was later required to orchestrate several of his more popular songs for large-scale performances.

Thomas Osborne Roberts was one of the judges who awarded Leila Megàne her first ever musical accolade, for singing at the Anglesey Eisteddfod in 1910 – their first encounter. After this, they initially went their separate ways – he moved from Llandudno back to his former home of Ysbyty Ifan after the death of his first wife, and began teaching privately and accompanying singers in concerts; she began an illustrious career in opera, studying in London and Paris, eventually gaining a five-year contract in Covent Garden in 1919.

Then in 1923, Megàne invited Roberts to accompany her on a tour of America, where they were married the following year, in New York. After their return, they settled in Caernarfon and Roberts began teaching privately and at the local grammar school.

In the 1930s, he moved to London as a teacher and accompanist, but returned to an isolated farmhouse in Wales – near Pentrefoelas – when war broke out in 1939. During the war years, he worked mainly at the Colwyn Bay food office but continued all his usual musical activities in his spare time.

He was taken ill after judging in Liverpool Eisteddfod in 1948 and died a few days later. He was buried in Ysbyty Ifan.

It was widely believed that he had received no traditional or formal musical education at any college or university and had always been described by the English press as self-taught. However, his brother (from whom he was separated by some years) recalled later that Osborne had studied at Bangor University at some point, though he wasn’t sure which subject. He was nevertheless able to stand comfortably alongside his (certainly well-educated) contemporaries as an authoritative voice of music in Wales – both in composition and as an exponent through his work leading choirs, accompanying and adjudicating.

His name is given, since 1951, to a prize at the National Eisteddfod awarded to singers under the age of 25 – winners of which have included Trystan Llŷr Griffiths, Gwawr Edwards, and Menna Cazel Davies. In 1933 he was elected an Associate of the Royal College of Music, for services to music education. 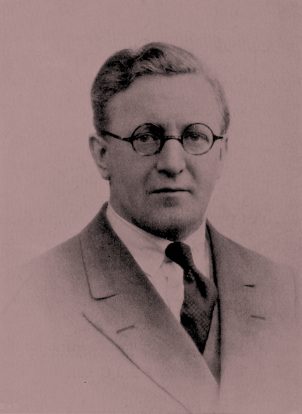 Thomas Osborne Roberts's manuscripts are held at the National Library of Wales. Please visit the database of their collection here. 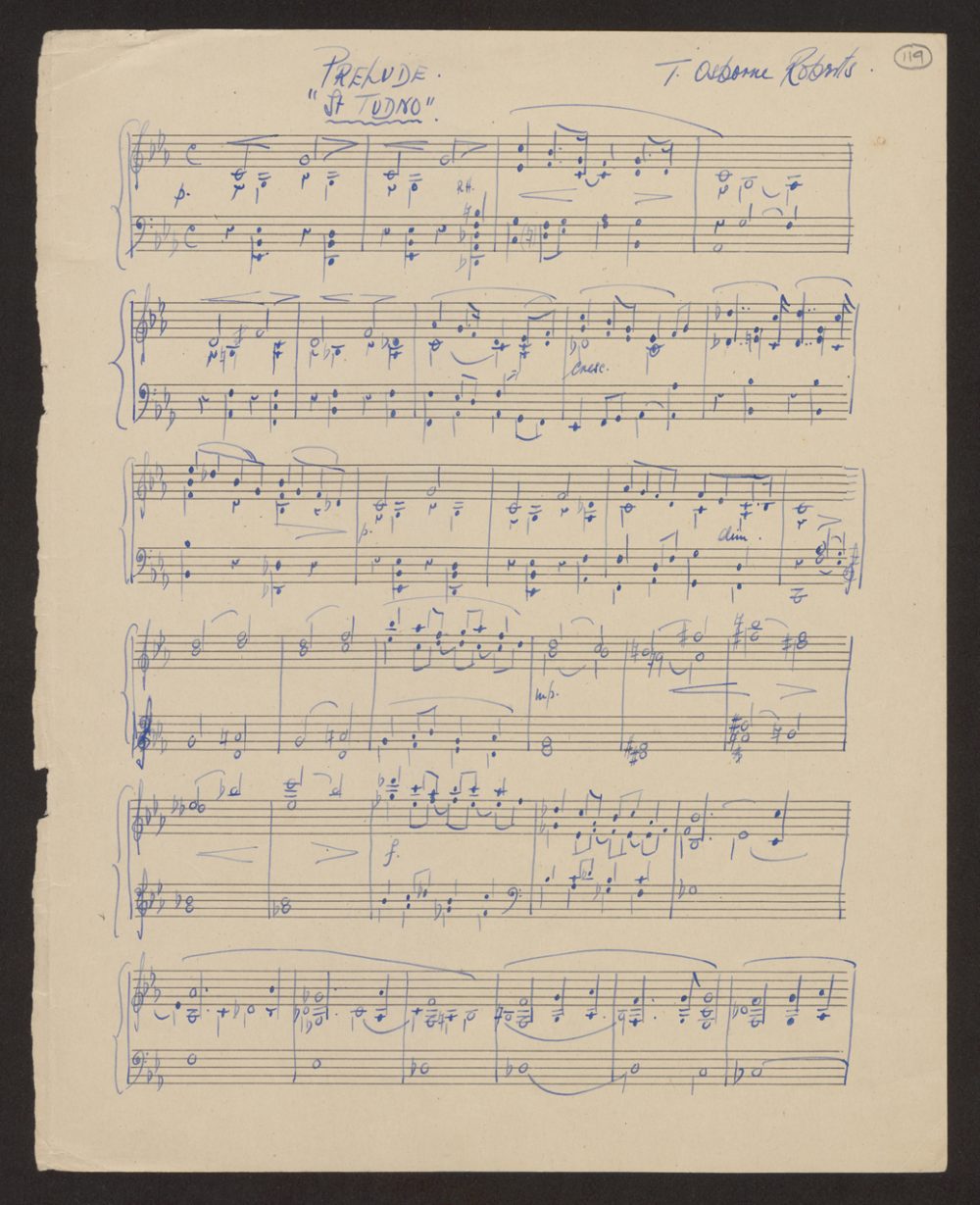 Thomas Osborne Roberts died shortly after giving his last adjudication in Liverpool in 1948, but shortly prior to this, he composed a few short pieces for the St Tudno Lodge in Llandudno – a Masonic Lodge of which he was a member. They were Prelude St Tudno for piano/organ, Suo Gân and Blaenhafren (the latter two being special arrangements of older pieces). Some of these he sent to the Lodge, who unfortunately had to put off the performance of these pieces until their priorities ‘return to more artful matters’ following an evident ‘rush period’ for the Mr Hughes concerned. According to a note left by Leila Megáne, the Prelude was the last piece he ever played on their piano – “all dressed up ready to leave for Liverpool. His last touch.” 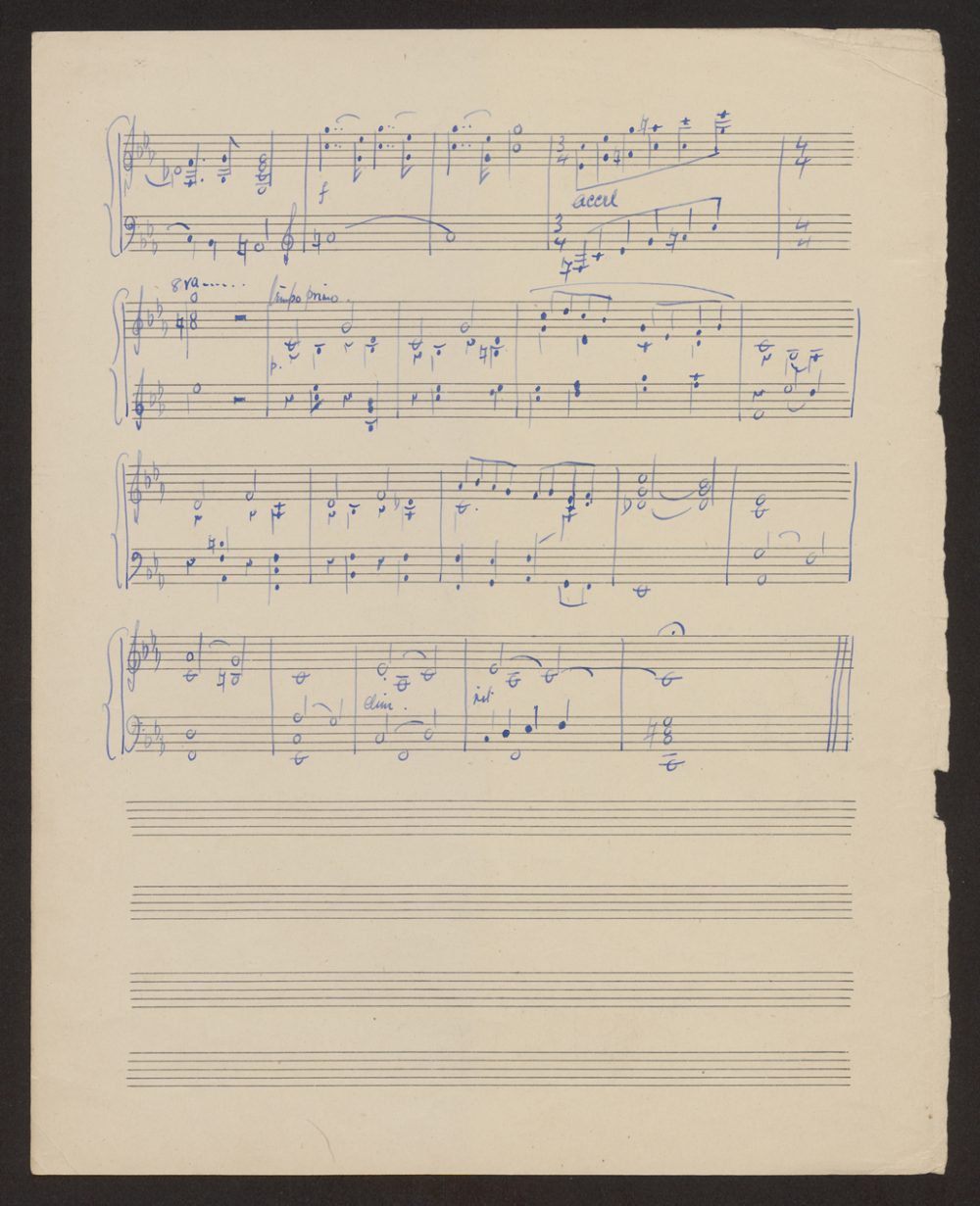 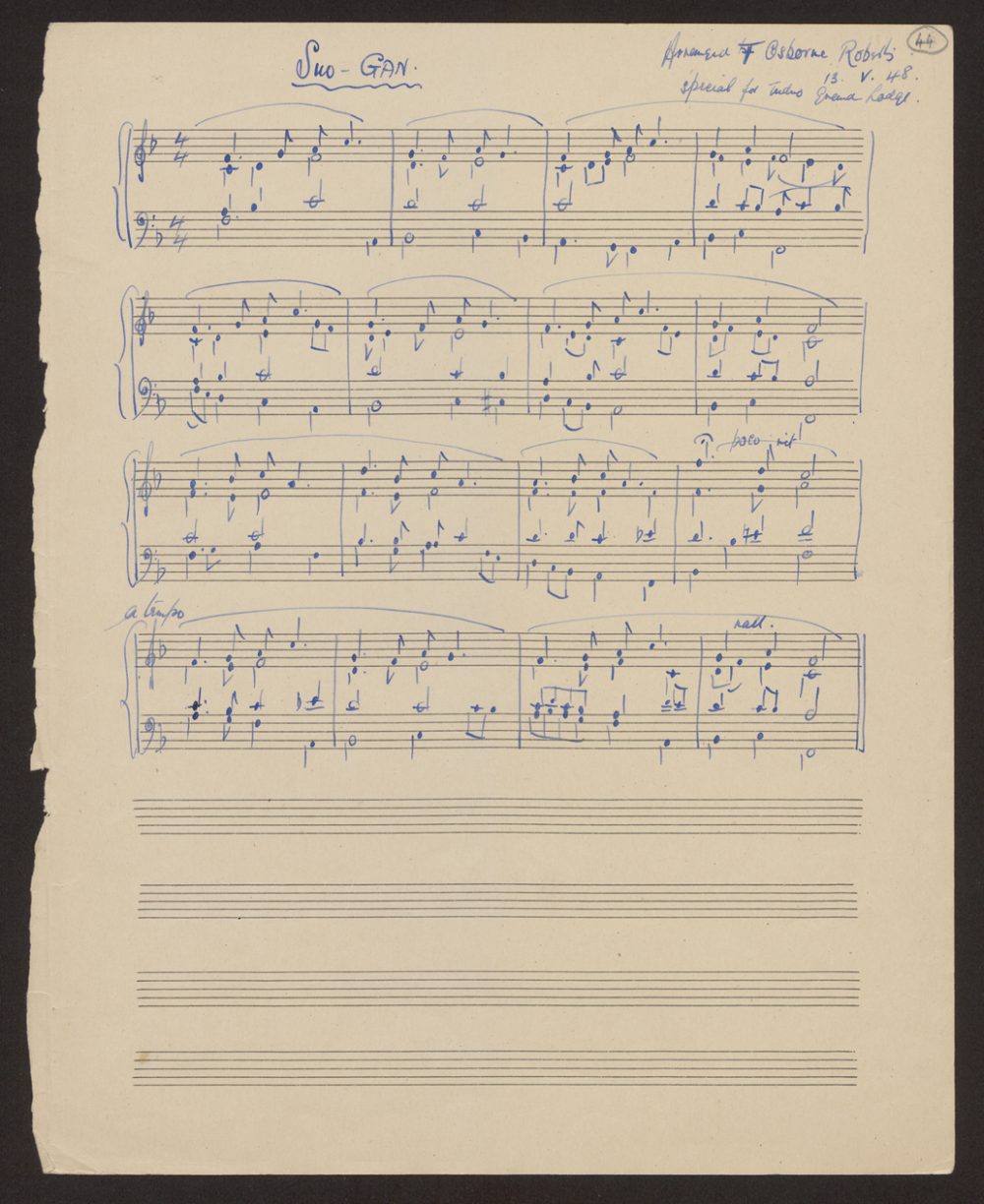 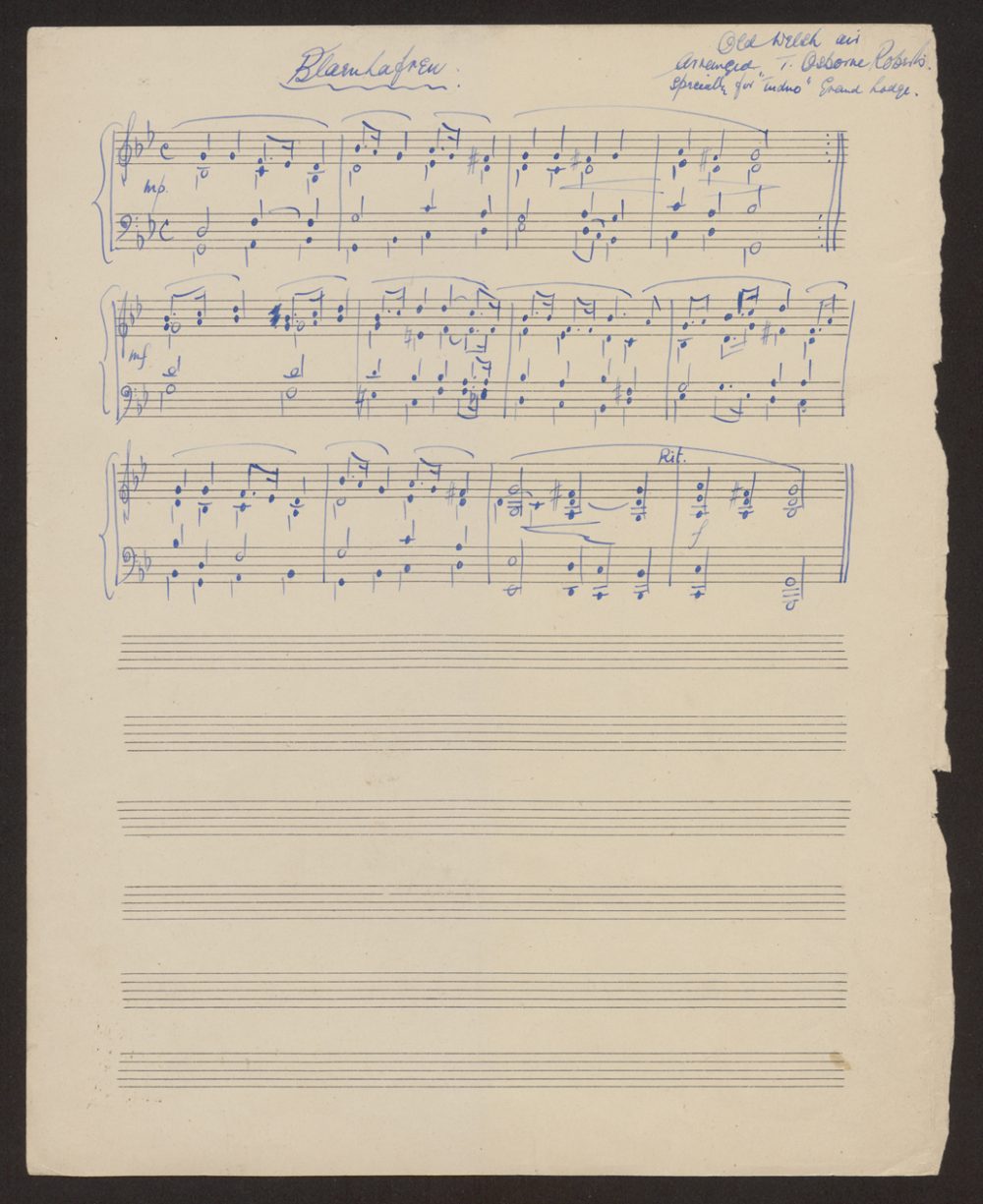 Cwsg fy Anwylyd Di-nam, a part-song for female voices, was a test piece in the 1923 National Eisteddfod in Mold (Open Ladies’ Choirs category) along with The Snow by Elgar. The prize was won by the Plymouth Orpheus Choir – it wasn’t unusual for the Eisteddfod to attract many choirs from all over the United Kingdom to compete at that time. Vaughan Williams was an adjudicator in the competition and in summarising the day was reported to have said: “Wales has bad music like all other countries, but if Welshmen produce music like this part-song by Mr Osborne Roberts, Wales need never fear to stand side by side with any other country. This part-song completely held its own against that of Sir Edward Elgar.” 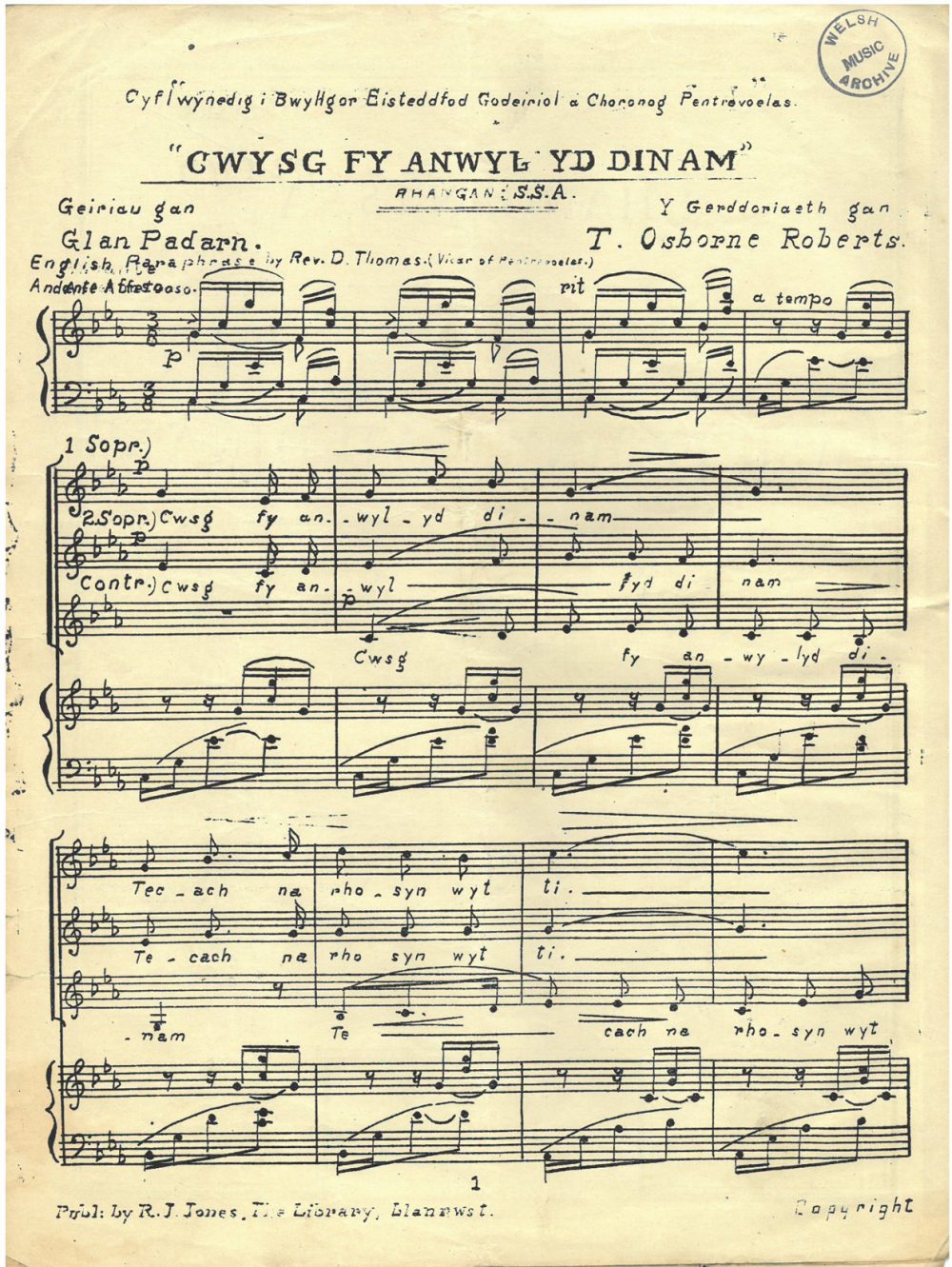 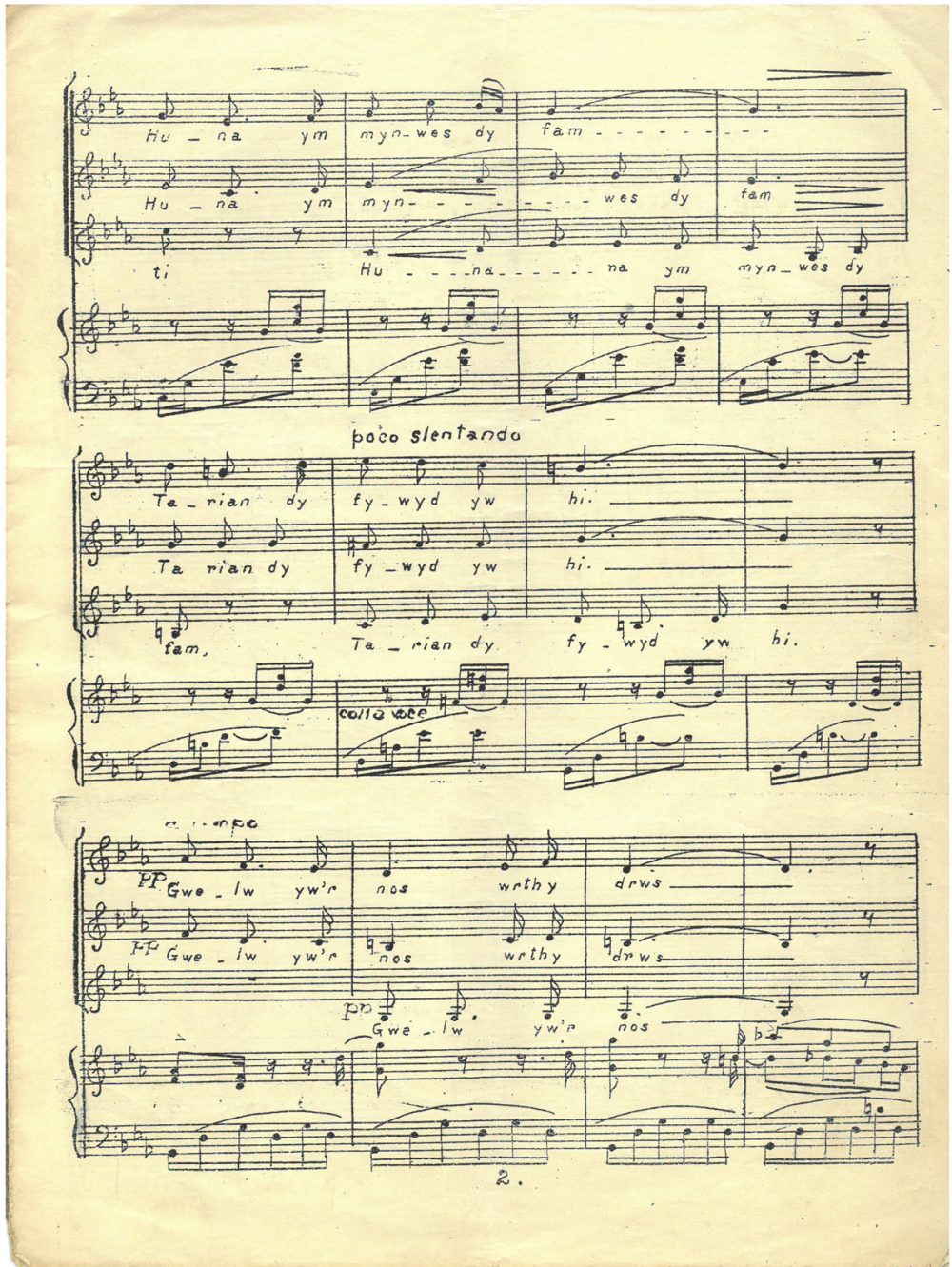 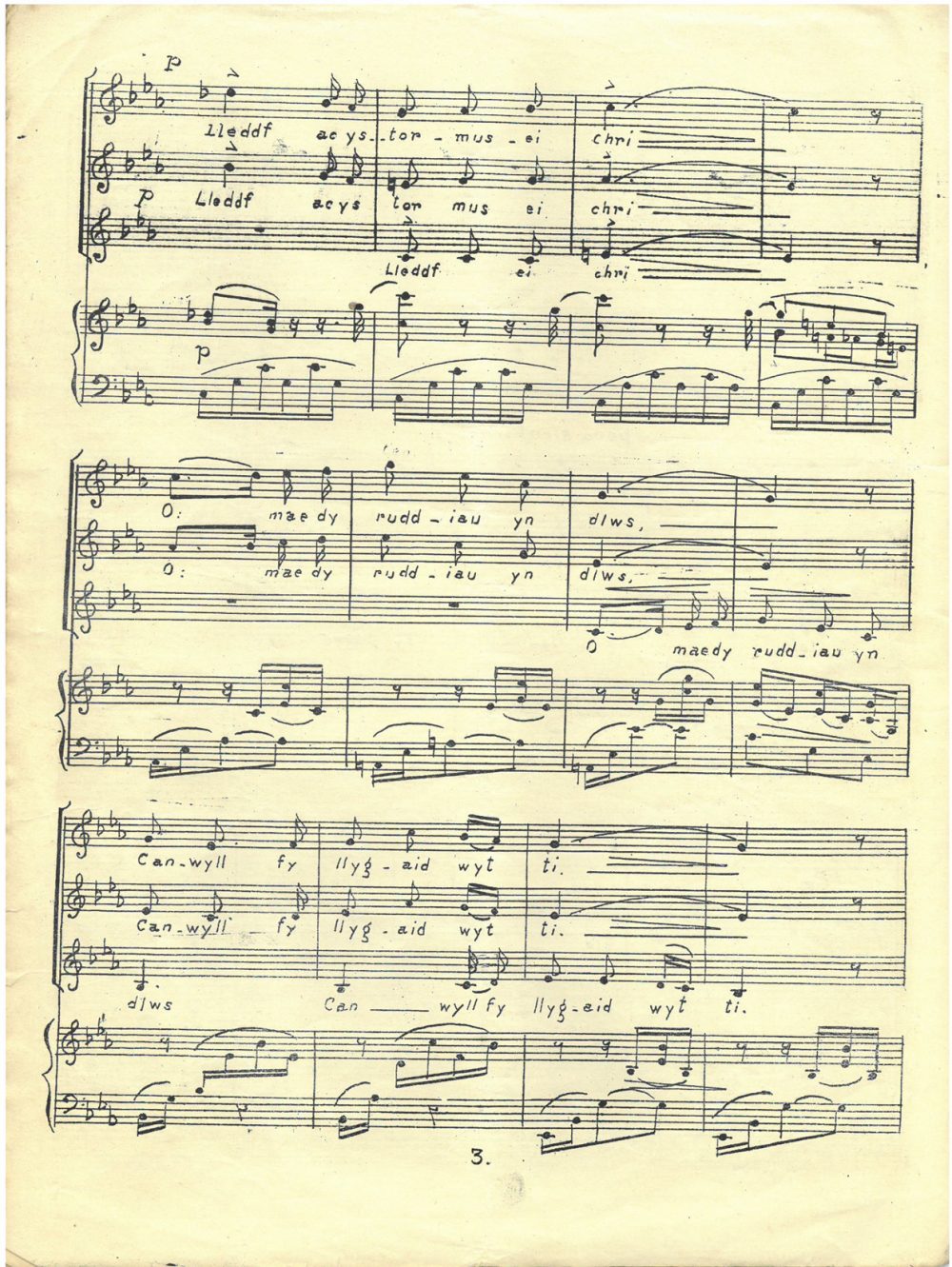 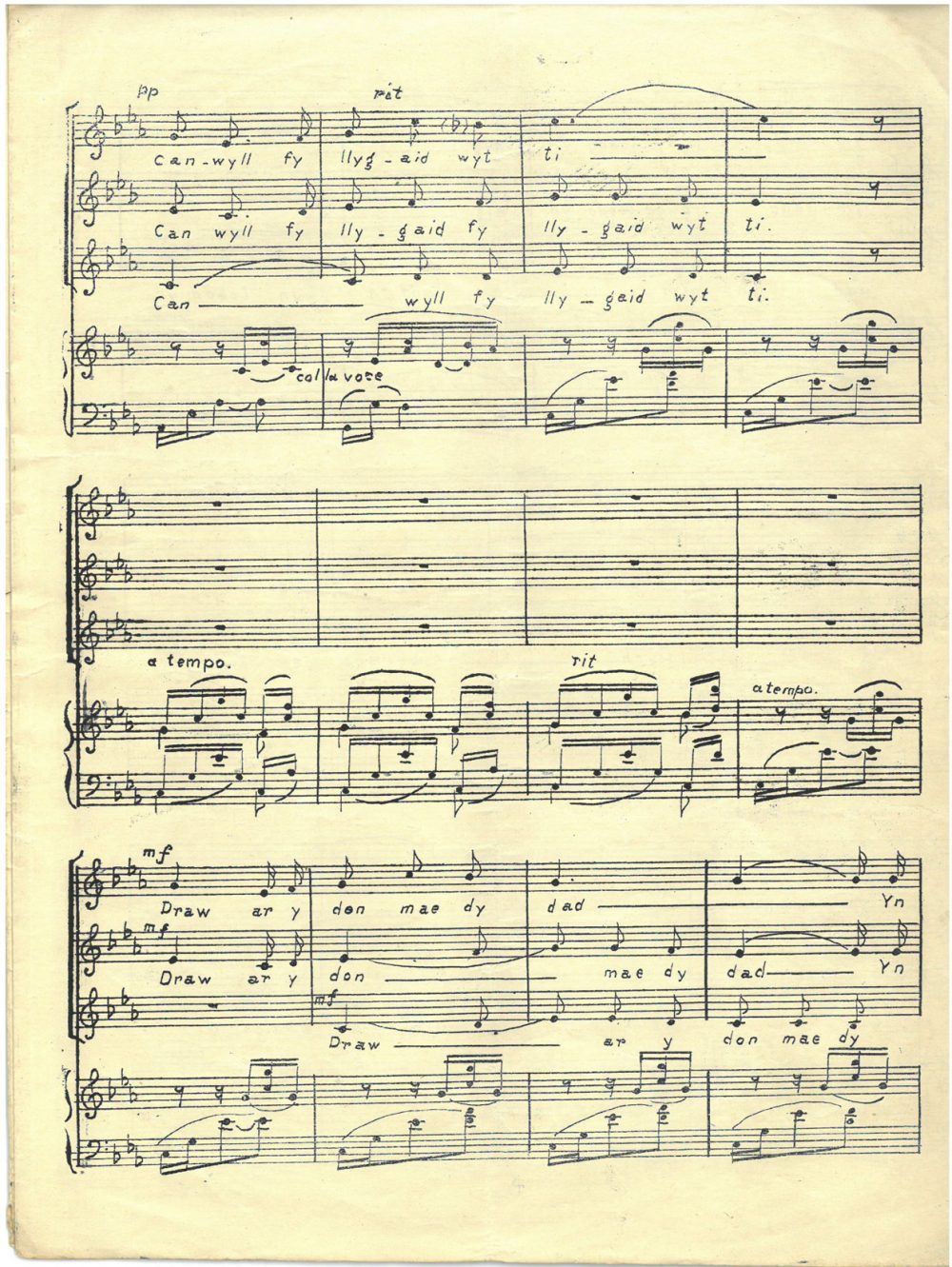 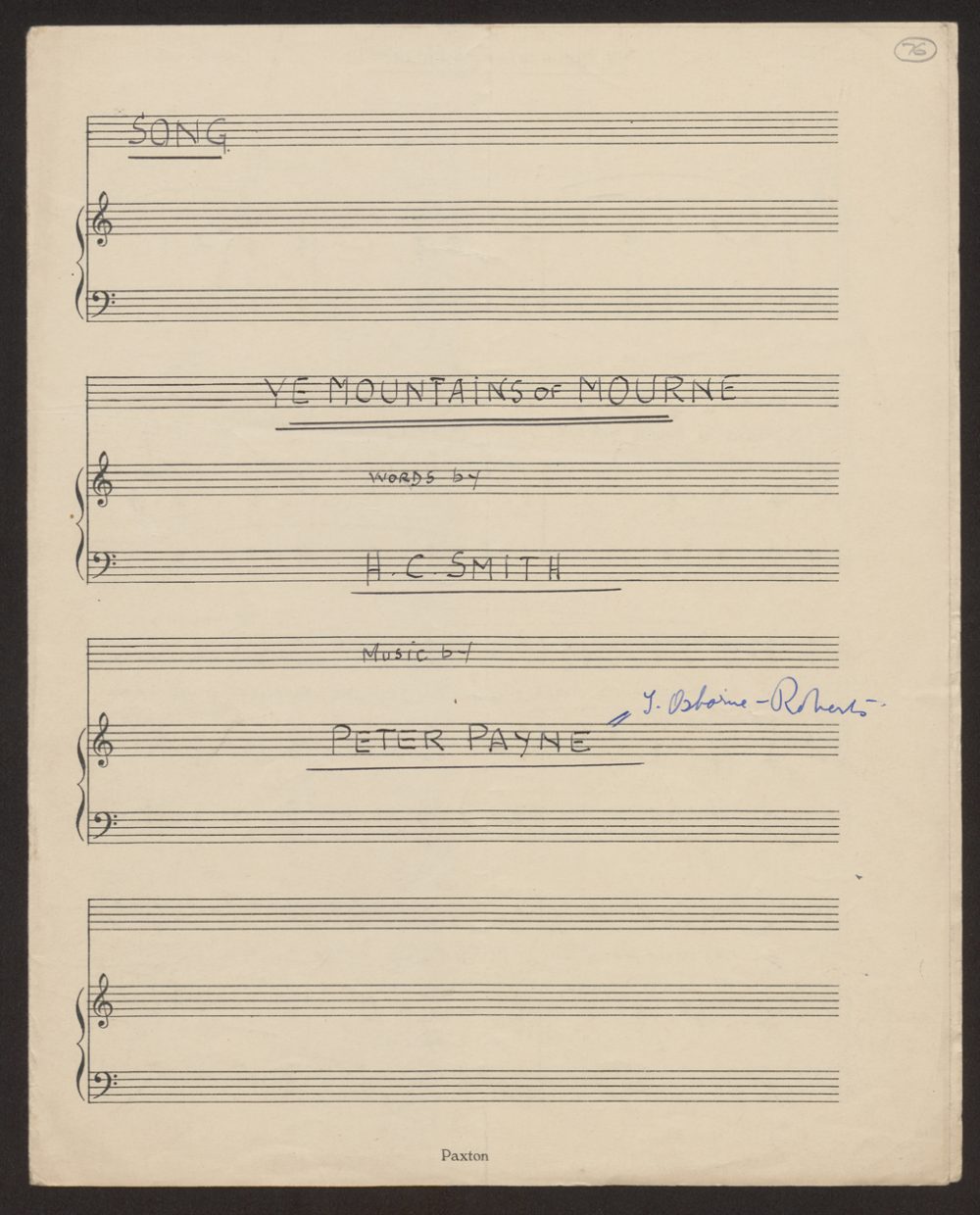 Evidence of several of Thomas Osborne’s pseudonyms exists in the National Library of Wales: these examples of ‘Peter Payne’, ‘Oscar Brett’ and ‘Rupert Aylwin’ demonstrate styles of writing that differ slightly from Osborne’s own. There’s no clear explanation for why he would necessarily use a different name, however. Another piece (not pictured), we know he wrote under the name of George Wither for a pastiche pageant set in the 17th Century. It’s possible (though this is strictly speculative) that there was some influence taken from his and his wife’s great interest in Spiritualism. His brother said after Osborne’s death: “In the latter days he was very spiritually minded. In fact, someone told me after he died that he had been living in another world for some time – the world of the spirit …”. It would not have been a great stretch to imagine that Osborne may have been influenced by this spiritual state of mind while composing these pieces and, being such a modest man, deferred the authorship to another entity. As the pieces weren’t published, there would not have been any tax- or royalty-related advantage in the changing of a name – they were private manuscripts for personal use. The blue ink visible on the manuscript is Leila Megàne’s own – she used the same pen for many annotations to letters and scraps after Thomas Osborne Roberts’s death – curiously re-affirming that her late husband was indeed the artist behind the music, despite the many aliases. 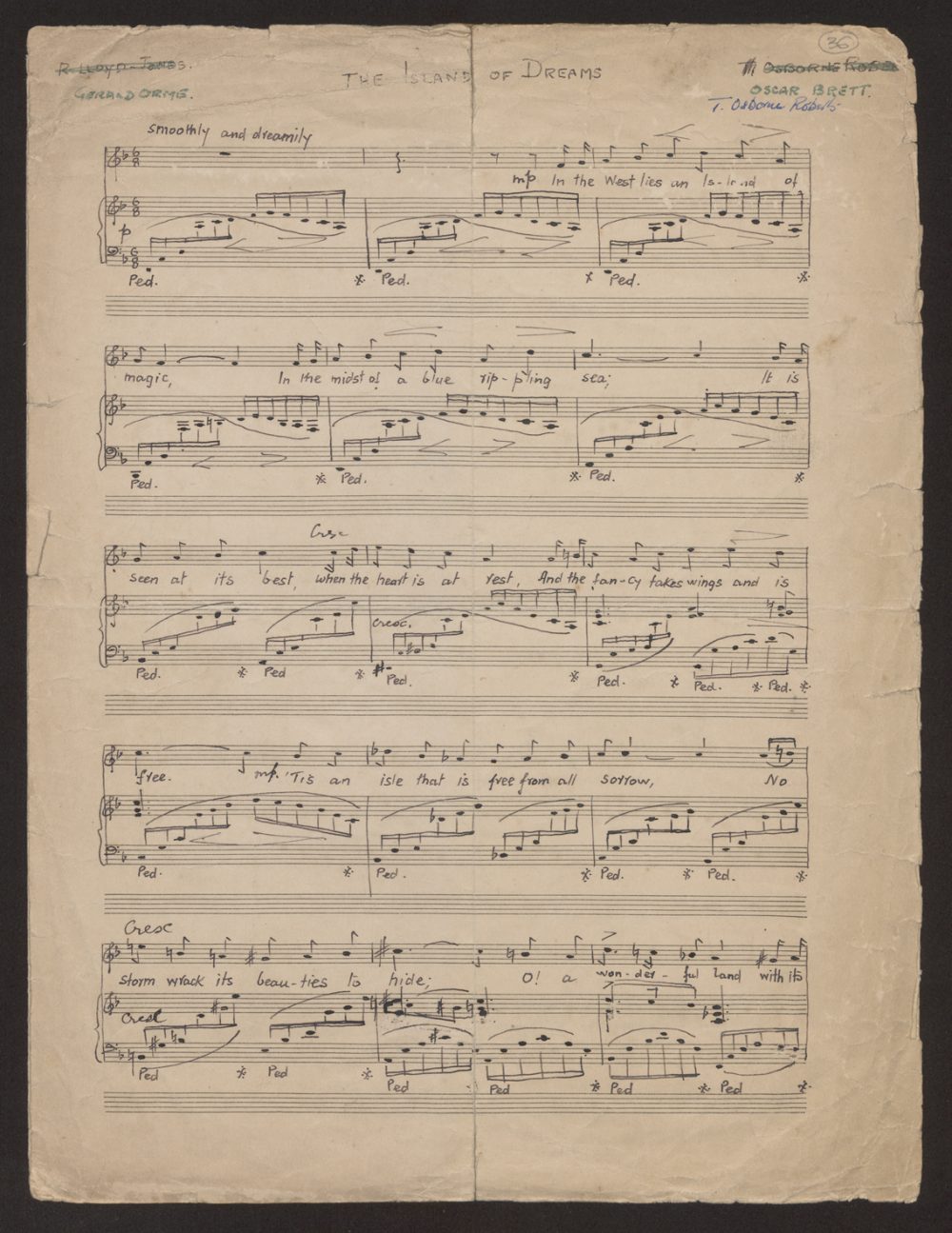 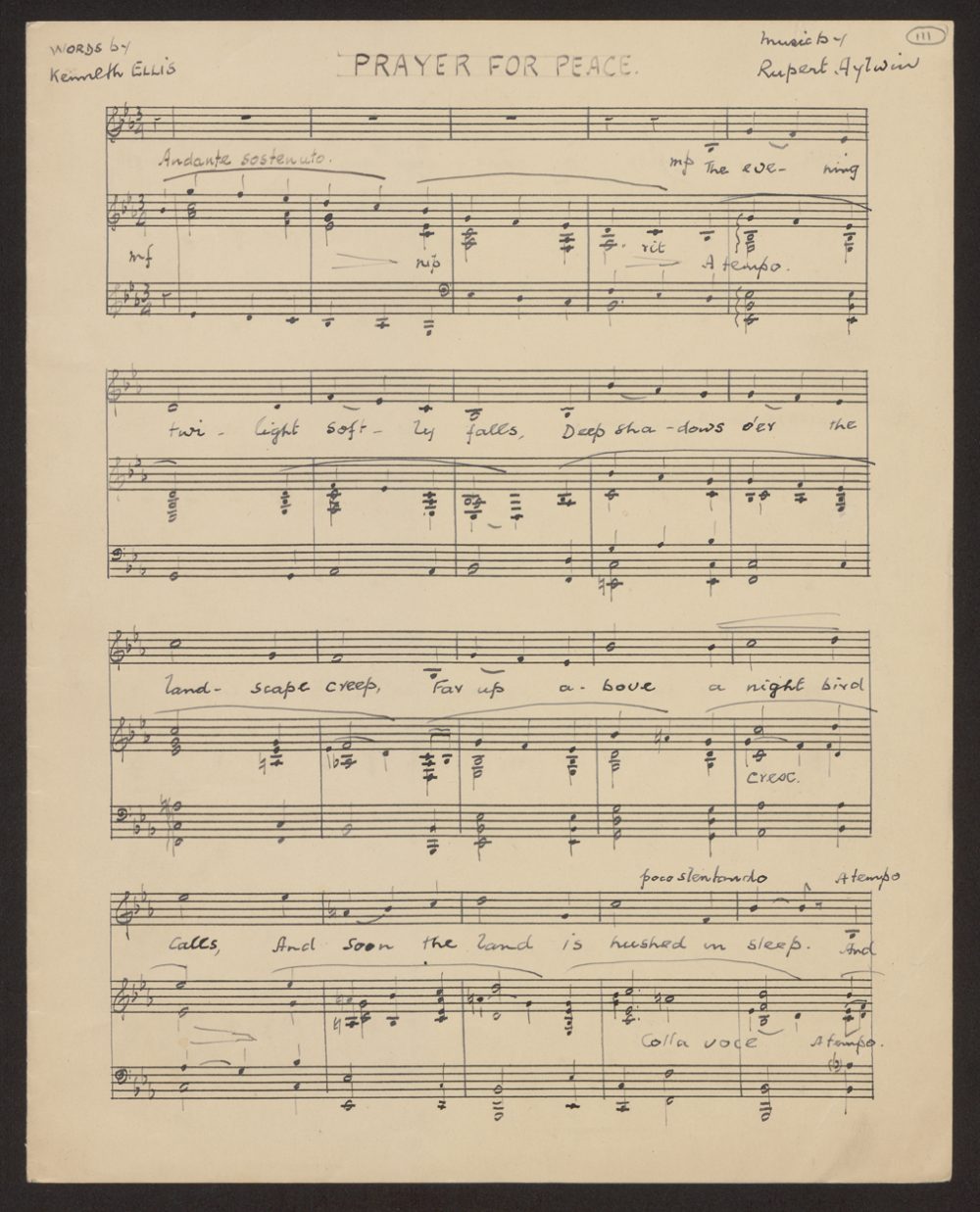